No one person, country or company can afford to see the inaction of others as an excuse to shirk responsibility for our shared environment.

As we mark World Environment Day on 5th June, I want to share a simple message with you: We have only one Earth, and that all of us, everywhere, have a responsibility to stand up for it, to nourish, restore and protect its systems and natural resources.

But behind this simple message, there’s a more complex reality.

Fifty years ago this week, the world put the environment centre stage when it held the Stockholm Conference on the Human Environment, where for the first time world leaders explicitly recognised two things: first, that human activity affects our environment and second, that big changes in our environment ultimately affect us back, often negatively.

A half-century later, world climate leaders again gather in Stockholm to try and further advance international cooperation on climate and the environment. They do so as mankind faces its biggest test of all: the ‘triple planetary crisis’ of climate change, biodiversity loss, and pollution.

This crisis is real, it’s happening now, and it’s having some of the biggest effects in small (island) developing states like Guyana.

To avoid the most damaging impacts of global heating, notably catastrophic flooding and drought, we need to limit the rise in temperatures to 1.5°C above pre-industrial levels. That means cutting global greenhouse gas emissions by 50% in the next seven-and-a-half years. And today, collectively, the world isn’t doing that. In fact, CO2 emissions haven’t peaked: they’re still rising. We are presently on track to breach the 1.5°C target inside five years.

Next, biodiversity loss is upsetting the delicate balance in the natural environment. This reduces the environment’s natural ability to manage and mitigate the effects of climate change, and ultimately jeopardizes the very food systems on which we rely. But today, species extinction is happening at one thousand times the natural rate. Human activity has already changed 75% of the world’s land surface, 50% of its water streams and 40% of the marine environment.

And then there’s pollution. One of the biggest threats to ecosystems and biodiversity is man-made waste: liquid, solid, and airborne. Microplastics are getting into food chains, killing animals, and even entering our own bodies. We know this. And yet at least nine million tonnes of plastic pollution enter aquatic ecosystems every year, a figure that’s growing all the time.

Therefore, it’s clear that we all need to do more to address the damage we’re causing. But who exactly is “we”, and what exactly does that mean? Because let’s be frank, the politics of this are even more complex.

The UN has a term that captures this complexity: “common but differentiated responsibilities”.

What this means is that although we all face the huge problems of the ‘triple planetary crisis’, some countries emit more greenhouse gases, disrupt more natural habitats, and produce more waste than others.

Likewise, it means that there’s recognition that historically, some countries have committed more environmental damage than others.

And finally, it means that there’s an acknowledgement that the lifestyles of some of the world’s people (from industrial production to vehicle use, travel and even diets or fashion) today do more damage to the environment than others.

I understand these realities only too well. My home country (Turkey) has historically made only a small contribution to CO2 emissions. But as my family back home becomes more prosperous, they, too, want to get on airplanes or put AC units in their homes. Indeed, the carbon footprint of Turkish citizens is projected to rise to levels that pose alarming threats to the planet.

Meanwhile, my Chief of Staff is from a country (the UK) that has historically contributed about 5% of all greenhouse gas emissions(!). It is also a country that has cut those emissions further and faster than most others.

And the vast majority of the dedicated UN team in Georgetown are from Guyana, a country that is actually a net carbon sink, but whose people understandably have aspirations and objectives that are likely to heighten their impact on the natural environment.

But this complexity is precisely why all countries should be doing all they can to address the crisis. And with that in mind, here’s what I think it all means for a developing country like Guyana.

First, on climate change itself, and the race to global net zero, Guyana’s commitment to adopting a low carbon development model, described in the Low Carbon Development Strategy (LCDS 2030), is now more important than ever.

Specifically, Guyana’s ambitions on energy are crucial. If LCDS targets are achieved, it would see the country meet a tenfold increase in demand for electricity supply by 2040 whilst retaining greenhouse gas emissions at 2018 levels. This would be an extraordinary example of how economic growth can be decoupled from carbon emissions.

Meanwhile, on inter-governmental platforms, I anticipate that Guyana, like other developing states, will continue to call on the world’s biggest greenhouse gas emitters, both historical and contemporary, to decarbonise their economies a lot faster than is the current trend, while calling them out on their responsibilities to meet the critical US$100 billion financing for climate change adaptation needs of developing countries, particularly SIDS.

On biodiversity loss, Guyana’s protection of its rainforest is an achievement of which the country is rightly proud, but we know that demand for livelihoods (in mining, in timber, and in agriculture) continues to put pressure on the country’s natural heritage.

Working with indigenous communities, guardians of the country’s biodiversity, is already an invaluable strategy for rainforest protection, and remains key. Likewise, the Government’s commitment to expand the country’s officially protected areas beyond the current 8.5% is important, not least because in Kunming, China later this year, countries will be asked to adopt a new international framework for biodiversity, including a global target to protect 30% of terrestrial and marine ecosystems by 2030.

And then, on pollution. With drilling operations expanding off Guyana’s coast, it’s going to be absolutely vital that oil companies and national authorities are fully prepared to respond quickly and effectively to any kind of spill. The recent spill in Peru demonstrates that we can never reduce risk to zero. So the 2020 launch of Guyana’s National Oil Spill Contingency Plan is a welcome development: continued close collaboration between operators, insurers and national emergency responders is critical to ensure readiness for a worst case scenario.

Second, Guyana’s preparations to transform its use and disposal of plastics will be in the spotlight following the historic UN Environment Assembly of March 2022. Guyana, along with 175 other countries, agreed to develop a comprehensive, ‘source to sea’ international treaty on plastics management by 2024. The health of Guyana’s terrestrial and marine ecosystems depend to a significant extent on the country’s overall management of its various waste streams, including plastics.

In fact, you’ll hear much more about ending marine pollution later this month, when the world gathers in Lisbon for the UN Ocean Conference, which aims to put science and innovation at the heart of global efforts to properly protect the sea.

Let me return finally to where we began, on our collective responsibility to stand up for planet Earth.

I will be making these points again on Sunday 5th June, World Environment Day, as I join the ‘Green Walk’ organised by Guyana’s Environmental Protection Agency. So I invite you to join me in the streets of Georgetown as we recall, as we first did 50 years ago, that we have only one Earth: let’s protect it! 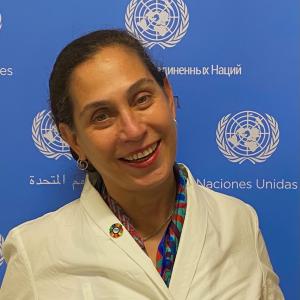 Goals we are supporting through this initiative

UN entities involved in this initiative